Following up from yesterday's post, the Excellence of Eloquetion that is Razorfist cut a rant on the Hunter Biden issue and includes ChiCom corruption.

I have got to figure out how to do "Fuck You, I Was Right!" in a wheelchair.

Now this is, so far, focused on said Biden and the dementia patient that is his father. I do want to know how this ties into the political corruption we see being exposed by Project Veritas, since all of the deceit and corruption they exposed and continue to expose materially and directly benefits the Bidens, Pelosis, Obamas, Clintons, et. al. that are at the top grifting like mad and cutting blackmail tapes like it was nothing.

It is as Anonymous Conservative said. This is a hostile enemy network, it works from the shadows, it has multiple elements comprosing it (and they are rivals; infighting happens), and it cannot succeed if exposed before it seizes control of an area. (Where it does seize control, it often struggles to hold it due to gross incompetence.)

This is how the Thralls work. It's corruption and management of assets all the way down, ensuring that the illusion persists to sucker the rubes while behind the scenes a handful (at most) of people, and very likely only one man, call the shots. The rest of the network's operations are all about extending and maintaining the network's reach and power; that in doing they commit horrific violations of the innocent as sacrifices--"the cost of doing business"--is how the supernatural elements are satisfied.

Yes, this means it is--and always has been--a Satanic cult. They just got savvy about how they did the culty shit.

And it's all coming out right as the God-Emperor smashes it. Empire is falling.

Narrative Warfare: This Is How They Compromise Targets

Anonymous Conservative had some good insights regarding the revelations gained from Hunter Biden's laptop. How Empire gets its Thralls is going to mirror how the Thralls get thralls of their own. (Edited to break up the original Wall O' Text.)

I have said previously it has appeared one thing Cabal required to advance people to the highest levels was a willingness to prove fealty by giving their children to the machine.

Now, I suspect it was not so much a request they made. Rather, the surveillance was always on the lookout for families like this. Fathers molesting children, sons molesting sisters, drugs, debauchery, and on and on.

Remember it is highly likely almost everyone gets a few days of being followed and them listening in your house every year or two, and some may get much, much more.

I thought they were on the lookout for threats, but now I think they were probably primarily looking for this. When they found a family like this, how high they rose was only a measure of how degenerate they were. The worse their behavior, the more blackmail Cabal would get, and the higher they would rise. Biden is a complete imbecile, but he is just a smidge away from being President, and if Cabal was in full control, he would be.

There's more like this, and you read it on his News Brief for today here.

This is not going to stop. More material will be released, drip-drop, over the last 10 days before the election. I would expect it continue until the Electoral College meets in December, just to be certain. It is after this that we can start the countdown to perpwalks.

Remember the lie at play here: "I see things your way, so let us cooperate so we may both benefit. I will support you, so you can proceed without fear." The lie here is that the support is conditional, and can be withdrawn at anytime, such that lacking the support is sure to result in exposure and destruction.

The revelation here is not just how corruption, in the ordinary sense, operates. It is the confirmation that there is a second cohort, one far more functional than those we see here, that is actually calling the shots and running the operations. This cohort is not confined to a specific race or nation; the Han are not the only spymasters. No doubt that there is a Western cohort--more than one--capable of running operations like this.

And yes, it is as #QAnon said: these people are sick.

Expect more exposure of ChiCom operations to come, thanks in part to Taiwan taking the opportunity to stick it to the Party (GTV is Taiwanese, and they're leaking the tapes), and now that the Daily Mail reported on it the Globohomo blackout has cracked; it will widen and break very soon, after which the Narrative Warfare will become the flood that washes away the filth.

Posted by Bradford C. Walker at 1:07 PM No comments:

Narrative Warfare: The US Department of Justice Sues Google

The United States Department of Justice announced an anti-trust lawsuit against Google.

“Today, millions of Americans rely on the Internet and online platforms...Competition in this industry is vitally important, which is why today’s challenge against Google...for violating antitrust laws is a monumental case both for the DOJ and for the American people.” — AG Barr pic.twitter.com/CG8UKXDtZo

You can thank Project Veritas for the timely release of their expose of Google to make this story carry weight while going viral.

And this is not Trump's October Surprise. That role goes to exposing Joe and Hunter Biden's criminal activities and their threat to national security because it's not just the Bidens, and it not just corruption; it involves human trafficking, pedophilia, and every single other party that benefited from or facilitated the Bidens' criminal activities.

This is the move against Big Tech that everyone on the right has called for all this time. What I would like to remind my fellows is that matters of law, by necessity, are matters of intelligence and as such operational moves follow lengthy and tedious intelligence gathering that goes on for years at a time. These moves have to be done in secret, and thus they cannot appear before the cameras--the same cameras that Big Tech's allies use to gaslight the population as they fight against the God-Emperor--so there will appear to the foolish that nothing is happening.

Now you see that this was not true. The court filings show that DOJ was investigating Google for some time before this, gathering intelligence before deterimining to go operational or not. That decision got made, and here we are.

Don't expect a swift conclusion either. The Microsoft case went on for years, so this will also, but unlike Microsoft this time DOJ can make use of social media to leverage social pressure to compel settlement. This is not the DOJ of the past; don't put it past Barr to wink and nod at that or something like it since Google certainly will do the same.

What you can expect is that the censorship Veritas exposed will ramp up now that it is directly targetted. (This won't help at all.) You can expect mainstream media attacks to ramp up in support. You can also expect more and more craziness from Twitter and Facebook as they too scramble to cover Google. They're all in this together, and if Google falls then all of them follow and they know it. The gaslighting will be thick and obvious, and ultimately prove counter-productive to the gaslighters.

This is not confidence in power. This is desperation over weakness exposed. Empire is falling, and the narratives aren't going to save it.

You knew it was coming. So did all of the folks mentioned in this article below, so don't be sad that it happened. Look for their backups and rebookmark those.

YouTube has scrubbed many popular “QAnon” and independent news channels from its platform after announcing new rules that prohibit what it deems to be “harmful conspiracy theories.” The channels collectively had millions of subscribers and some of the many channels that were removed during this purge include:

YouTube claims that it’s introducing this new policy to remove conspiracy content that’s “used to justify real-world-violence” – a claim that’s similar to those used by several other tech giants when justifying their arbitrary QAnon bans. For example, Facebook framed its QAnon ban as a crackdown on “potential violence.”

Note that this happened, and yet the pro-pedo channels are still there as are the pro-ISIS and similar violent actors, so again I must tap the sign.

Big Social has designated #QAnon as an Enemy, and this move is meant to cull the enemy from territory Big Social controls because it undermines its allies and their common cause. If that is what you take away from this, then you're already ahead of most normies.

Of course, #QAnon saw this coming. A while back the word started coming out that to maintain operational presence in enemy territory (e.g. YouTube), it will become necessary to go gray (drop the #QAnon tag) and resume disseminating the information under other monikers as part of a more general Truth Movement scene. Do not be the least bit surprised to see a new suite of channels rise up in the vaccum left that does just this: talks about the info without mention Q, showing Q drops, mentioning /8kun/, etc. by citing and linking to cutouts.

As for those nuked, you'll find that many of them have their own sites and more of them are doing as the Supreme Dark Lord Vox Day did and set up their own subscription-based video streaming sites in addition to having backup channels for free viewing at places like Bitchute or LBRY. That's what SGT Report did, and it's why they'll survive--even thrive--despite YouTube doing this; it will drive organic traffic to their sites instead.

Susan seriously underestimated the audience for these channels. They have newsletters. They have sites. They have backups on other social networks. Word spreads on where to go and how to access it fast, and these people--unlike the corporate oligarchs--have a far more human approach to content sharing. She thinks she sunk a threat just as the election was about to climax; all she did was break containment. Nice job breaking it, Villain. This is why Empire is falling.

Posted by Bradford C. Walker at 9:00 AM No comments:

Narrative Warfare: The Polls Are A Big Ball of Biden Cope

Today's Friday. Time to have a chuckle going into the weekend. First, here's Razorfist reminding you that the polls pushing Biden are bullshit.

The Supreme Dark Lord concurs and expands on this here.

And then there's Stonetoss, who captures in panels what otherwise takes one or more articles to get across. 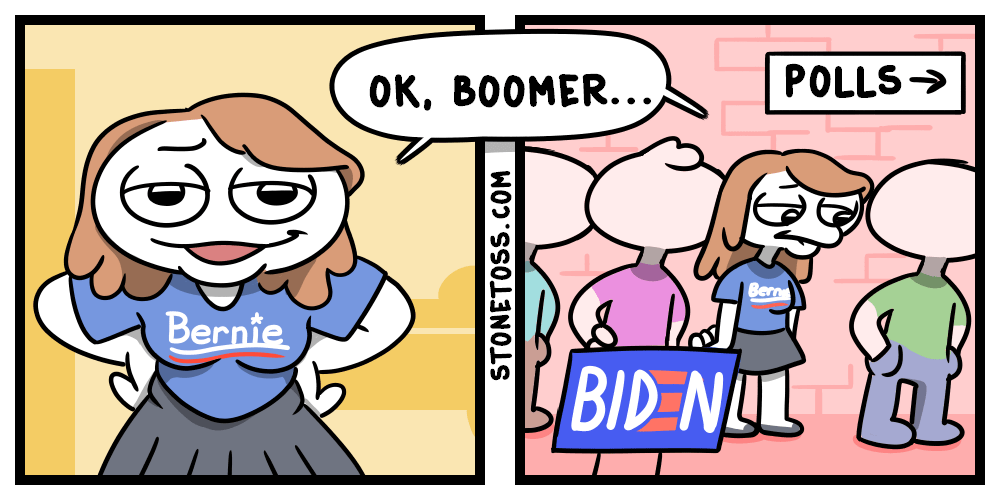 Context is here, and it just amplifies the burn.

As Wictor says, be happy warriors. The God-Emperor isn't perfect, but he's ours and he deserves--and will--win. They know, so be sure to vote to stick to the folks that hate you, want you dead, want to rape your kids, and think its funny so Trump can finish the job. Empire is falling, and the freakouts on Trump are all the proof you need that he's for us.

Narrative Warfare: This Is What Political Media Looks Like

There really isn't much more I need to say to set this up, other than "For those coming in late, pay attention."

When we say "Keep politics out of X" we don't mean stories can't have in-setting politics.

We mean this.. Exactly this. pic.twitter.com/LrtQcYU4R4

And this is why:

As for how they keep doing it, take a look at how these productions get organized, green-lit, and financed. You'll start finding your answers there.

Posted by Bradford C. Walker at 3:43 PM No comments:

And no, I ain't apologizing for shit. Christopher Columbus did nothing wrong.

Posted by Bradford C. Walker at 3:12 PM No comments: