I think Brian Niemeier is on to something. He put forth on his blog the other day a post on Humiliation Rituals. Put that together with the utter unconcern about destroying whatever business or property they acquire, such that--while true--"Get Woke, Go Broke" is less a taunt and more of an observation.

They want to go broke. They want to drive it into the ground, sully it, defile it, so fill the audience with disgust that they disavow it and walk away. They want that to be the only alternative to becoming this: 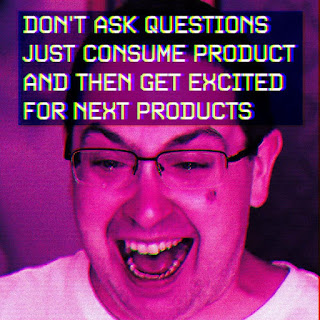 What's the point? To demoralize the targeted population. Quoting Brian:

"They knew from history that forcing people to publicly state manifest untruths demoralized them.

That's how humiliation rituals work. If you can sap the people's fortitude until they'll willingly recite patent falsehoods, they won't have the fortitude to challenge the elite."

That bugman will recite patently untrue and unreal things, and believe them, because his entire psychology collapses if he doesn't. So long as he is able to go on deluding himself that Mouse Wars is good, he can avoid admitting how badly he's unmanned himself. Welcome to the baseline psychological conditioning for even the biggest of Thralls. He loves Big Brother.

And there's another element to it. It's a scalp. "We destroyed what you love, and you are powerless to stop us." Yes, there are workarounds and other remedies to be had, but most of them require that the Thralls be purged from power to be effective. Without it there is only so much that can be done. That leads to today's message from Captain Obvious: SEIZE POWER! Take it and hold it. Then you can worry about how to do the big think fixes.