The End of Empire Comes From The East

The Neo-Tsar Putin I has decided that he's had enough of Globohomo's fake-and-gay regime in Ukraine and the endless bad faith provocations upon Russia using Ukraine as a pretext. He directed the Russian military (a) support the breakaway sections of Ukraine along Russia's border that are actually Russian and (b) invaded Ukraine to put down said regime. What follows is Putin's speech in English, in its entirety, taken from the Bloomberg article because fuck paywalls and fuck them.

I consider it necessary today to speak again about the tragic events in Donbass and the key aspects of ensuring the security of Russia. I will begin with what I said in my address on February 21, 2022. I spoke about our biggest concerns and worries, and about the fundamental threats which irresponsible Western politicians created for Russia consistently, rudely and unceremoniously from year to year. I am referring to the eastward expansion of NATO, which is moving its military infrastructure ever closer to the Russian border.

The Only Danger In The Chinese Military Is Its Incompetence

You can put aside any fears of the Chinese Communist Party conquering any additional territory. The military at their command is unfit for purpose.

I guarantee you that, as corrupt and decadent as Western militaries can be, they are still actually sufficiently competent to do their jobs when called upon. This cannot be said of the People's Liberation Army. It has never won against any other military in war after the CCP took power in 1949; Vietnam cleaned its clock in the '70s, and India does so today, as the policies surrounding recruitment and retention are as stupid as any you see in the West- and that's before the blatant corruption.

Furthermore, not only is the CCP incapable of doing their own research--they steal and copy everything--what they do make is terrible in quality and cannot be relied upon. The "tofu-dreg" issue with their infrastructure extends throughout their economy, and the source of that problem is in the character of the Mainlanders themselves. At all levels, what you see is someone getting a budget and a job, pocketing most of the budget and sending the rest on to the next step in the chain as a subcontracting bid, where it ends in some piss-poor peasant getting a pittance for the task and deciding "Fuck this" and half-asses it out of spite.

That same thing goes on in their tech industry, their manufacturing exports, and even within households and families. Makes certain parties also known for being notorious misers and cheats look downright wholesome at times. In short, West Taiwan is a Paper Tiger as well as an enemy of both Globohomo and the Men of the West; let Globohomo fight it out with Beijing and leave the Han on the mainland to their well-deserved fate.

For you dissidents out there--and especially those of you that consider yourselves thought-leaders--you will find nothing but pain and disappointment in China. Shun China, abjure China, reject China- especially if their intelligence agents and assets approach you looking to support your efforts because will demand in turn that you turn into propaganda outlets for the Party, and all that means is that you Took The Ticket from another vendor. China is just Eastern Empire, and Empire Must Fall.

Narrative Warfare: Make Everything A Cult

In Crazytown, there's a concept called "Revelation of the Method". This is taking somethig of the Occult and normalizing it. Example below.

That image came from a presentation on marketing, and it is now standard pracice worldwide. It has been implicitly for about a century (as any history of Public Relations will reveal, in coded language), and explicitly for about 20 years at the least.

This concept is usually said in the context of explaining Predictive Programming, but in this context we're talking about implementing formerly secret practices.

Using the techniques by which cults induce subjects into the psychological state necessary to make them into cultists as marketing techniques, and letting it be known that this is the case, fulfills the Occult definition of "consent".

This is the concept that Empire and its Thralls must inform you of what they intend to do before they do it, and they take silence as consent to their aims, but "inform" using coded language and symbolism that targets are unlikely to correctly perceive if they perceive at all (yes, this is fraud; no, they don't care)--and thus has become the backbone for their Narrative Warfare machine.

However, their power is that of the illusionist and the mezmerist; once it is seen, it cannot be unseen and thus it is broken.

And as we see now, that power is very fragile indeed--honk, honk--and if not for the Thralls being loud, determined, persistent fanatics as a group they'd be no threat at all.

The need to tell on themselves is their weakness, and is one of the reasons why Empire falls.

Posted by Bradford C. Walker at 2:29 PM No comments:

Narrative Warfare: They Will NEVER Leave You Alone 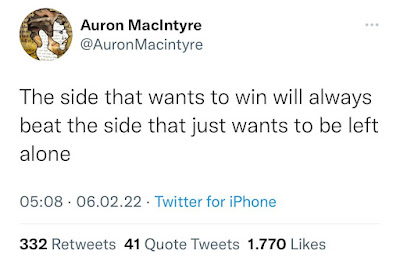 We who would prefer to be left alone have no other choice but to fight to win, for Total Victory, or be conquered by those that would rather see us conquered or destroyed.

This means, oh fellow dissidents, that you are already at war and you had better start acting like it or you're going to get steamrolled by the enemy- and if it's one thing I have not seen much of until recently it was exactly this realization turning from thought into action and thus into consistent behavior.

No, you aren't going to escape this by relocating out of the West; you don't belong anywhere else, so even if you do resettle outside the conflict zone it will be a temporary respite at best due to the reach of Empire via Globohomo.

It is as the Supreme Dark Lord, Vox Day, says: Conflict is in the air we breathe. We have no choice but to embrace the fight, and that is not merely limited to getting fit, engaing in training and forming up with others near them. Logstics and intelligence is vital to success. Those unable to be up front and doing public operations are still able to contribute by providing the means for those able to be at the front to do what needs be done.

And yes, until now I have not seen anyone try to do things properly like this, and now that I am I hope that it's not too late. No, not that Empire won't fall; that's going to happen. This is now about the survival of the West, about fighting for the future--a future without Empire--and avoiding being dragged into annihiliation with the fall of Globohomo, the Death Cult, and Empire.

And this is going to require a pragmatic attitude, which I will get into more next Sunday.

Posted by Bradford C. Walker at 2:14 AM No comments: