I can't believe I have to say this: Pandemics Change The Rules

If you don't get that, then you're incompetent and you're not tall enough for this ride. Sit down, shut up, and do what you're told; let the adults handle what you're facing.

Diseases don't care about Muh Economy. They don't care about your rent, your payroll, your student loans, your medical bills, or anything else. They're unapologetic assholes; all they care about is getting theirs and making everything their bitches. We use zombies to make pandemic dynamics comprehensible to common people for a reason, and that's due to Standard Zombie Apocalypse Scenario being your Standard Pandemic Scenario.

And Muh Stonks do not matter.

Why do I say this? Because the economy of Empire--of Clown World--is the fakest and gayest thing I've seen in my lifetime; remember what I said about the origin of the currency in your bank account? Yes, that totally-not-fraudulently-created-debt-note you think is money is the artifact behind an entire global economy that runs off unicorn farts and other Things That Don't Fucking Exist.

Things that don't exist, but you're told--ultimately on pain of death--that they are so you have to pretend that they are in one of the most supreme humiliation rituals in the history of Mankind, and are used in entirely predictable and controllable "business cycles" and "black swans" meant to bullshit you into building up real economic assets that they can swindle you out of when they crash the economy and buy your shit for pennies on the dollar so you can hope to Not Fucking Die long enough to work some bullshit makework job doing some bullshit bitchwork in a mega-corporation they own and run.

So no, I don't care that Corona-chan is torching the global economy. It's fake, and Satanic at its root, so it's torching what should be torched (and weakening the fakes behind it so we can finish the job) and therefore not to be mourned or missed in the slightest. The real economy--the physical economy--will be (and is being) protected so what returns once this is over will ensure that we come back swiftly. The fake, bullshit side of things are dying off and they can stay dead forever.

Muh Rights also do not matter.

We're now seeing that not only was the 19th Amendment a mistake, so was The Enlightenment and the Renaissance is looking pretty sketchy (and with it, the Reformation). This pandemic has revealed that the only thing that can stop a colossal titanic institution is another colossal titanic institution; LOLbertarians and Muh Anarchy are coping harder than a Hoover on overdrive now that they're seeing their philosophy exposed as being just as much an artifact of luxury politics as SJW Death Cult insanity. What is working is exactly what has always worked: a strong patriarch, leading a strong government, wielding the power of the state on behalf of his nation first and foremost- and cooperating with other nations when and where it is best to do so.

No, you don't have the rights you think you do. Neither do you have the power that you think you do, or the influence. You are akin to a child in a family, and the Sovereign is your father; just as you do what your Father tells you, so do you do what your father tells you- and no, understanding is not required, only obedience. You can figure it out after the fact, when things calm down.

There's a good reason for why you aren't seeing the full extent of what's going on; the majority of you cannot handle the truth, and you'd just get in the way if you did. While you're complaining about shit that doesn't matter, or coping with cunty Karens being bitches, Vox Day's got a list of what's been going down behind the scenes (and yes, this does mean that the #QAnon folks are far closer to reality than anyone else due to the accuracy of info they have). 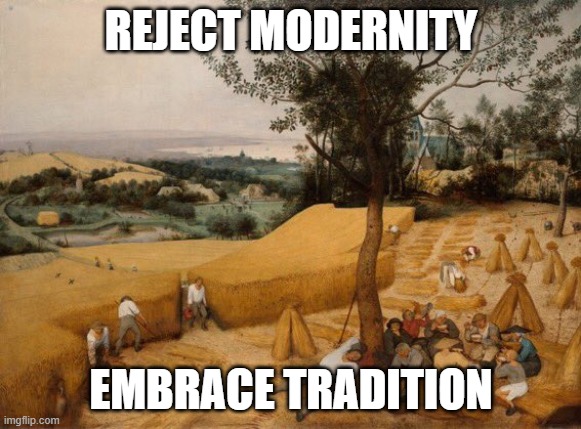 And be grateful to Almighty God that He raised up Trump to be His instrument.