Wokal Distance put this out on Friday the 25th. I'm summarizing the thread here below.

The idea of "White Privilege" is everywhere...and it's NOT what you think. So, let's talk about it.

The idea of white privilege has spread through society like wild fire since about 2013. A lot of people think that the basic concept of white privilege is "white people face less racism then black people." This is NOT what the term means.

The woke play a game with "white privilege" where they alternate between two positions: an extreme position they really believe and talk about openly when they won't be attacked, and a far more modest position they fall back on and defend when anyone questions them.

This tactic is called a Motte and Bailey fallacy. It is named after a castle that has a motte (a small but easily defended fortress you can hide in when attacked), and a bailey (a large valley with lots of resources and treasure where all the fun takes place)

In the case of white privilege, the motte is the idea that Black people face racism white people don't face, and the bailey is the idea that all white are racist and perpetuate an unjust system of racial hierarchy without knowing it: 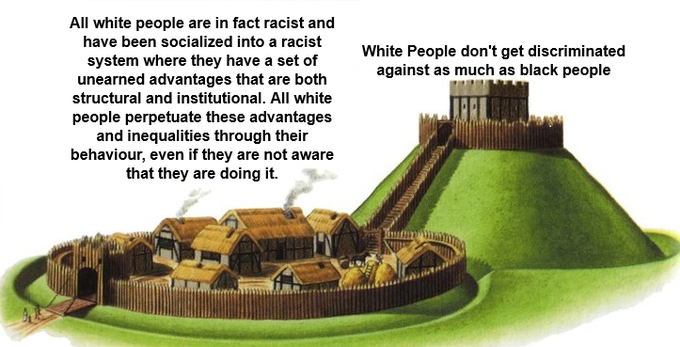 It's easy to see how this idea gains traction and how useful it is to the woke. They take a simple idea which seems right, and when everyone accepts that idea, they switch to an extreme position while using the same name.

So, Lets take a look at the 'bailey' of white privilege, and show you what is actually going on.

First, you need to know that the woke carve up society according to the doctrines of "dominance" and "oppression." You could think if those as the yin and yang of wokeness.

Dominance is when a group uses power to get to the top of the social pyramid, and then use that position to gain even more power to maintain their position at the top of the hierarchy. "Dominance" in woke-speak is always about taking, wielding and hoarding of social power.

The woke think the dominant group (which the woke think is white males) use their control of how society communicates and thinks to tie the hands of other groups, and the result is anyone who isn't a white male is *oppressed* by the systems of power created by white men.

Oppression is only experienced by non-dominant groups in society, not white men. White men may experience hardship or difficulty, but not oppression. Because oppression is to be disadvantaged by the systemic power of white men BECAUSE ONE IS NOT A WHITE MALE.

According to wokeness, white men are never held down by society FOR BEING WHITE MEN. They might face prejudice, but that prejudice is never SYSTEMIC. That is, white men can only ever be victims of isolated instances of discrimination, never victims of oppression because even when a white man is discriminated against by, for example, a woman of color, he is still discriminated against in the context of an entire society built for his benefit. So even when a white man faces prejudice, in the larger context he still has the upper hand.

A good example of how the woke view privilege and oppression is a video game where white men play the game on easy mode, women play it on medium difficulty, and black disabled trans people play the game on the hardest difficulty there is. This is how they view the world.

The woke think 'white privilege' is the societal equivalent of white people are playing the game on an easier level then Black people, indigenous people, and brown people.

THAT is what the woke mean when they talk about 'white privilege.'

I want you to notice how much intellectual machinery I had to first unpack just so I could then do a proper job of explaining 'white privilege.' The reason I had to do that is that wokeness isn't just a set of ideas, it's a complete *worldview* that functions as a religion.

White privilege, which we now can see is that being white grants one and unquestioned and unearned set of advantages, entitlements, benefits, and freedoms solely because they are white. In other words, white people are playing the game on easy mode. This means that the woke think every situation a white person is in, no matter how difficult, hard, or painful, would be even more difficult, hard, and painful for Black, Indigenous, or Brown people. It doesn't even matter what the situation is, the woke think it's easier for white people.

So, the next time a woke person begins to push on you the idea that you have "white privilege" your goal should be to show people the *worldview* behind wokeness. Don't let them get away with saying "white privilege is just that white people don't face the racism others do."

Force them to defend their entire worldview so that people can have the opportunity to see the postmodern intellectual yeast the woke use to bake their worldview.

Don't let them play their Motte and Bailey game: force them to be clear about EXACTLY what they are arguing.