Narrative Warfare: I Told You It Was A Set-Up

I said when it was announced that the Chauvin trial was fixed, but for an acquittal, and now that is coming to pass.

Apparently, no one is watching the trial of Derek Chauvin, the former Minneapolis police officer on trial for the murder of George Floyd. Otherwise, the media couldn’t get away with their spectacular lying to the public about how the prosecution is killing it.

It’s quite the opposite. In fact, in less than a week, the prosecution’s theory of the crime has subtly shifted from MURDER! to “failed to provide what we would say, in retrospect, would be a full and complete duty of care during the one- to three-minute interval between Floyd’s resisting the police to his dying, as a hostile crowd screamed obscenities at the police officers.”

The defense hasn’t even begun to make its case, but the prosecution’s witnesses keep helping Chauvin. (The only exception to the wild media lying is Headline News, where the lawyer commentators go the extra mile by watching the trial.)

Week One was chock-a-block with weeping bystanders wailing about how they felt watching Chauvin restrain Floyd. This would be tremendous evidence if the charge against Officer Chauvin were “first-degree upsetting bystanders.” But that’s not the charge. That’s not even a crime.

QUIZ: Is foam coming out of the mouth a sign of:

Apart from that crucial fact, McMillian’s evidence only pertained to “first-degree upsetting bystanders.” Which, again, is not a crime.

My favorite witness — and the media’s favorite, too! — was Genevieve Hansen, Feminist Hero. She appeared in court in her firefighter dress uniform and a belligerent mood — though not as belligerent as the day Floyd died, when she showed up in sweats and began shrieking at the officers.

The headlines are along the lines of “Firefighter: I Could Have Saved Floyd’s Life, But Police Wouldn’t Let Me.”

Yes, apparently, Genevieve would have invented a time machine, gone back, and stopped Floyd from ingesting three times the lethal dose of fentanyl. I take it back: Chubby girls make the best firefighters! (Don’t get snippy with me: It’s beyond outrageous that fire departments have abandoned all physical fitness requirements solely in order to hire more women.)

According to Genevieve, the police on the scene unaccountably refused to step aside and take direction from her, despite her full ONE YEAR of experience as a firefighter.

Genevieve was totally on top of the situation. In her statement to investigators shortly after the event, she described Floyd as a “small, slim man.” Floyd was at least 6-foot-4 and weighed 230 pounds. The largest police officer on the scene was Chauvin, coming in at 5-foot-9 and 140 pounds. Genevieve missed nothing!

Even in the calm setting of a courtroom, with no agitated bystanders yelling at her, here are the things Genevieve says she would have done to save Floyd’s life!

“I would have requested additional help.”

Remember that this man is the Attourney General for the State of Minnesota, and therefore is the shot-caller for this politically-charged case. 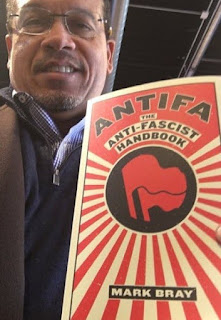 That photo was taken at a local Commie bookstore, Mayday Books, and his son is an open Antifa comrade sitting on the Minneapolis City Council. He's Antifa. He's a Glowie asset, and he's allied to Governor Tim Walz who remains embattled over his Emergency Power abuses in this state.

There are already professional rioters agitating the local ghettos and college suckers here. They need political cover to execute their riots, and the Governor needs political cover to crush his enemies. Riots erupting that cause massive damage to the Twin Cities solves both problems.

Sure, Biden and the national players will exploit this for their gain, but they are not the primary beneficiaries here. It's a state and local power play, not a national or international one, and it is far more defensive than offensive. If there is a silver lining to be found in this clusterfuck, there it is: they're pulling gay ops to cover their asses, not to execute attacks.

Either way, it means I'll be watching the rioters again soon enough. I give it a few weeks before it's warm enough for the riots to touch off, at which time the case will be put down and Chauvin gets his acquittal. No, I doubt the jury will convict even if they want to; I have no faith in any independent actors being in that jury box. This entire case glows.