Narrative Warfare: Consider That Monarchy Is The Compromise Position 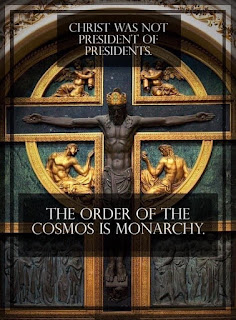 Let's talk about this meme.

For a lot of people, this is a spicy meme. Not for me, and I can say so succinctly: "Monarchy is the compromise position."

The real order, to which Monarchy is the compromise, is "God->Nation->Family". A nation--a separate and distinct population all of the same race, speaking the same language, practicing the same religion and thus sharing the same culture--is ideally run by its Patriarchs- the senior fathers within a single patrilineal consanguinity. The eldest such man is the Patriarch of that line. The eldest within the nation rules the nation. It is not a thing to be regarded as familial property; it is an office that has simple, but strict, requirements and thus passes from one qualifier to the next regardless of who that man is.

Sure, by no means a flawless or ungamable arrangement; there is no social or governmental scheme that isn't, so the simpler schemes tend to be the better ones in practice.

The reason Monarchy is the compromise is because a proper monarchy has most of these elements, but the office is familial property and the rules for succession and assumption are often anything but simple and straightforward such that average peasant children can wholly and readily comprehend it. This is also the genesis of any form of professional ruling or managerial classes that inevitably seperate from and become comtemptuous of their own common people.

By ensuring that the supreme shot-caller (a) is always a mature man of the people he rules over with skin in the game and (b) rarely going to be either the grantor or beneficiary of succession to/from such office (due to the amount of killing required) it minimizes the potential for nepotism; keep the capital moving from one family homestead to the next, and keeping the Church in the loop means that you have an actor of like power at hand to keep the old men as the wise old men they need to be.

Think like an engineer here: reduce the moving parts to the mimimum necessary to achieve desired results. Monarchy gets close, but true Biblical Patriarchy is better. Most nations are not ready for it, hence why Monarchy is the compromise- and a real Monarchy, a proper one, doesn't ever mix nations. King of the Bobs is a Bob and not also king of Jebs, Bills, or Teds. Claiming sovereignty over foreign nationals or alien races is claiming imperium, which is Empire, and Empire Must Fall.