Wokal Distance On The Convergence Of American Churches

Taken from today's Twitter thread and quoted below with mild editing.

The Wokeness and postmodernism have come for Christianity. The conservative Southern Baptist Convention passed a resolution allowing the use of Intersectionality and Critical Race Theory as tools for theology. So how did we get here? Two words: Emergent Church

The Emergent Church movement gained popularity in the late 90's early 2000's. They were young, cool, and artsy. But they were also proudly, and openly postmodern. The movement began to go mainstream when this book on Postmodern Ministry by Brian Mclaren came out in 1998.

While Mclaren eventually proved to be the leader of the movement, he wasn't the first to bring postmodernism in to the Church. The first one to do that was very likely John Caputo in 1987. With a book on DECONSTRUCTION in Hermeneutics (fancy term for biblical interpretation).

In "The Prayers and Tears of Jacques Derrida" from 1997, Caputo attempts to bring deconstruction further into Christianity. Those who saw my thread on deconstruction (I'll link below) will recognize the importance deconstruction to postmodernism.

In 1996 Christian Theologian Stanley Grenz saw all this tried sounding the alarm with his book "A Primer on Postmodernism," in which he predicts the coming of postmodernism and says Christians need to be ready for it. (turns out he was right, and 20 years ahead of his time).

Now, because Grenz saw postmodernism coming He worked with John R. Franke to build a framework that would allow Christianity to survive in a postmodern world without being completely deconstructed. Grenz wanted to deconstruct-proof Christianity. Unfortunately it didn't work.

Why did it fail? Because Brian McLaren and John Caputo worked tirelessly to bring postmodernism into Christianity. Remember WWJD? What Would Jesus Do? Here's the postmodern version from a book by Caputo (forward by Mclaren): What Would Jesus DECONSTRUCT? Read the description.

McLaren wrote many books, including "The Secret Message of Jesus," where he deconstructed traditional Christianity while substituting postmodern Christianity in it's place. Here @RaviZacharias exposes McLaren's nonsense as only Ravi could. It's beautiful. I miss you Ravi.

That @RaviZacharias clip from is from 2007 when the deconstruction was the sort that attacks meaning and questions truth. But the Emergent church switched their focus from Meaning to Power. Martin Van Steenwyk explains the shift he helped facilitate in this interview from 2009.

I'll explain postcolonialism another time, but the 3 main ideas are

Add post-colonialism to deconstruction and you get a scenario in which anytime anyone says something is true either (a) their claim gets deconstructed or (b) they get accused of trying to make their ideas dominant in society so they can get power. Sound familiar?

In 2011 the first academic book on evangelical Christian postcolonialism came out. It has some familiar names. That's right, both Brian McLaren and John Franke (the man Stanley Grenz thought would help him protect Christianity from postmodernism) went full on postcolonial.

McLaren actually very clearly explains why it is that he blends his deconstructive postmodernism with postcolonial theory. It's because the deconstruction is used to dismantle the ideas of colonialism. Again, does any of this sound familiar?

Also, notice that John Franke writes his postcolonial article with Megan Defranza. well, who is she? She's a former board member for Q-Christian. What's that you ask? it's an organization that fully embraces postmodern gender theory in the name of Jesus. Deconstruction indeed.

Who else likes intersectionality? The Emergent Church! Rachel Held Evans, who joined the "Emergent Conversation," tried bringing intersectionality into Christianity before her unfortunate passing. Note she mentions Brian McLaren.

So as you can see, the Emergent Church of the late 90's and early 2000's has it's fingerprints all over the Social Justice Christianity that we see today. This is no surprise those are both fruit of the same poisonous tree of postmodernism. What do we do now? Fight.

This is a fight for the soul of your churches. If you won't take a stand here, where will you draw the line? Time to fight. Let's go!

Let's make this easy. It's HERESY! What do we do with heretics? Do we tolerate them? Do we argue with them? What do we do? 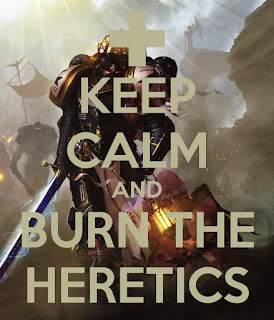 That's right, we ELIMINATE them.

There is no "fighting" to be had, not as Wokal implies. You identify the heresy, call it out, demand compliance, and eliminate everyone that doesn't repent. No need to raise your voice. No need to dispute. You stand in the authority of God and demand obedience to His Word, and you smite every last motherfucker that gainsays you. Yes, even those who dare call themselves "pastor" or "minister" or "priest".

Witch Test them immediately if they dare come at you with invocation of Scripture or similar sophistry. Eliminate those that fail on the spot.

There cannot be peace between the Faithful and the Wicked. Those that push this are wicked, so expose them and cull them without fear for you are doing what not only needs be done, but what is good for your people.

We certainly do not let them come into our lands, enter into our churches, and drive us out of what is rightfully ours. We throw out the invaders and the traiors, those that do not end up fertilizing our crops.

This is harsh, but it is true that Evil fears a militant Good. Godly Men must be Hard Men; every single time things go wrong, it's because men cease being Hard.

The Thralls will not tolerate what they cannot control. Convergence is how they seize control. Heresy is the poison used to sell it in the Church. Burn the heretics.